I do a lot of mapping for fun and exploration. Sometimes these projects get their own blog posts and end up in my portfolio. But other times, they’re little things that don’t really have anywhere to live; they’re not worth blogging about on their own. Instead, I generally scatter them on the winds of Twitter, and move on to something else.

However, I want to give some of these cartographic trifles and doodles a more stable place to live, and so I’ve gathered several of them here. I browsed through the last several months of my Twitter account, and here’s what I’ve come up with.

I don’t get to use colors in the pink family very often, so I made a couple of maps to just enjoy that part of the palette.

You can click those images to have a look at larger versions. I simulated two-color halftones for each one, as I’ve been fairly obsessed with halftoning lately.

For the map of Alaska, and the relief, I just recolored maps I had previously made.

I make a lot of maps of Michigan, and it’s a weird-shaped state that doesn’t really efficiently use a rectangular page layout. So I decided to see how it ranked vs. other states, assuming that we mapped them with north towards the top of the page (but remember #northisasocialconstruct).

I did a little scripting to just quickly put each state on a Lambert azimuthal equal-area projection, tangent to that state’s centroid. Then I looked at the minimum bounding rectangle, and compared its area to that of the state. That just gave me a table of values. Then I spent a long long time actually making the graphic. And to answer your question: that’s Colorado in position #1, with Wyoming very close behind.

This isn’t quite a cartographic doodle, but it doesn’t have anywhere else to really live in static form. I made it so that viewers could watch me label it in a YouTube video. In the end, the video (somewhat not-smoothly) pans around the map, but I wanted to put it here in its final form.

I halftoned it (again, a current obsession). Only yellow, cyan, and black inks here; no magenta. I used my giant Michigan landforms map as a reference to know where to put some labels. In the context of this map by itself, some of them probably don’t make sense, because the coarse hypsometric tinting just doesn’t make them apparent.

Early in the COVID-19 lockdown, people were making joke maps about their daily commute, showing things like transit maps routing people from bedroom to bathroom to home office. I didn’t make one of those, but they reminded me that I’d never seen an actual floor plan of my apartment. So, I made one.

Every winter I lead folks from the UW Cartography Lab on a short hike across a small part of Lake Mendota, and I made a little flyer promoting it. 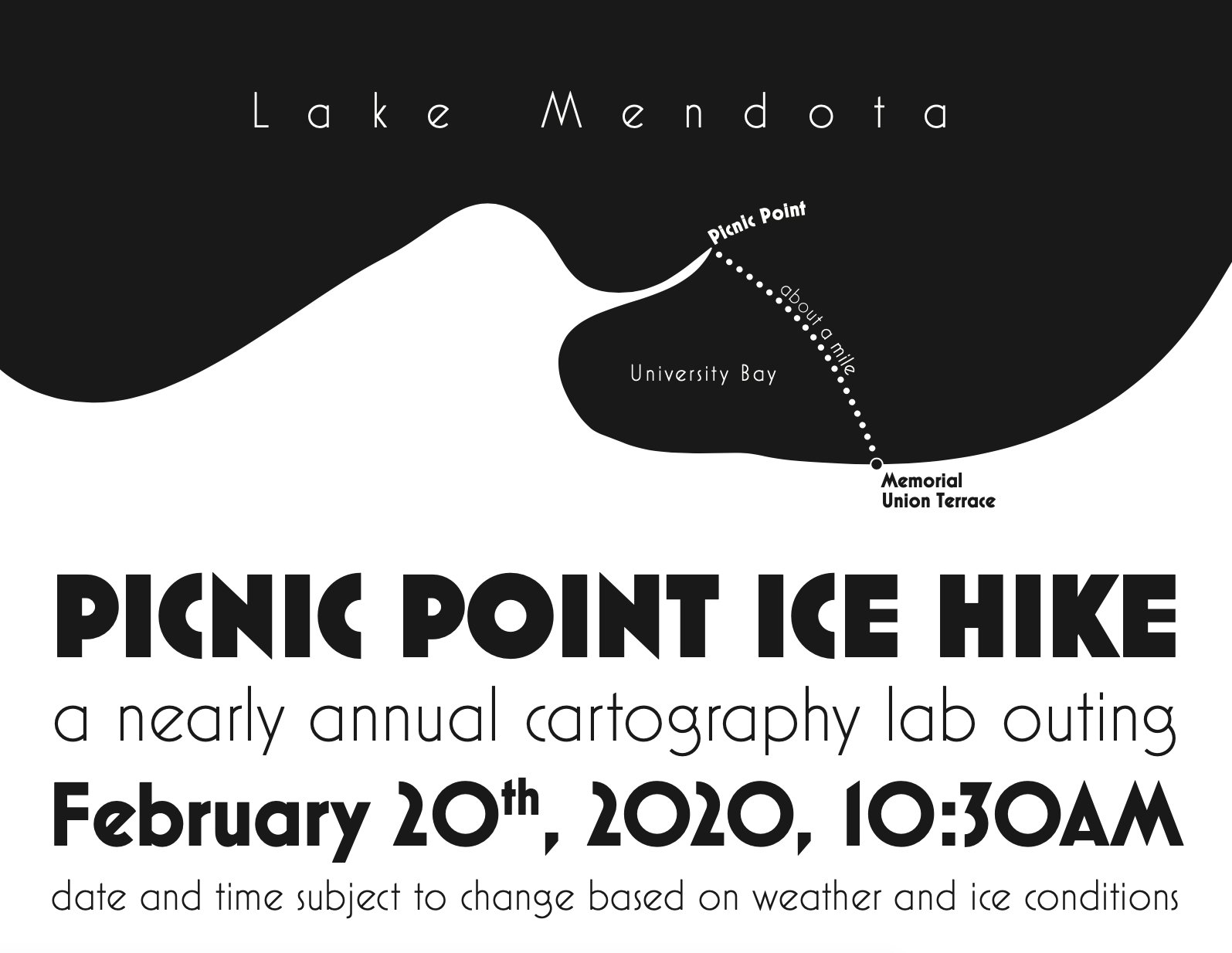 This year there were two of us hiking, which is not unusual, but I have had groups of six or so.

In most people’s workflows, maps are made from layers. I just wanted to do a little animation that showed how that worked. It was a good way to learn some new stuff in Blender, and get more animation skills under my belt. I’m still quite the novice, but this one turned out nicely.

So this concludes our tour of some of the random stuff I’ve put on up Twitter since mid-2019. There’s more, but I think these are the most worth collecting into one place. I’ll try to do these every once in a while. As the post title suggests, this is not my first such collection; I wrote one up many years ago. But I’ll try not to let so many years pass until the next one.